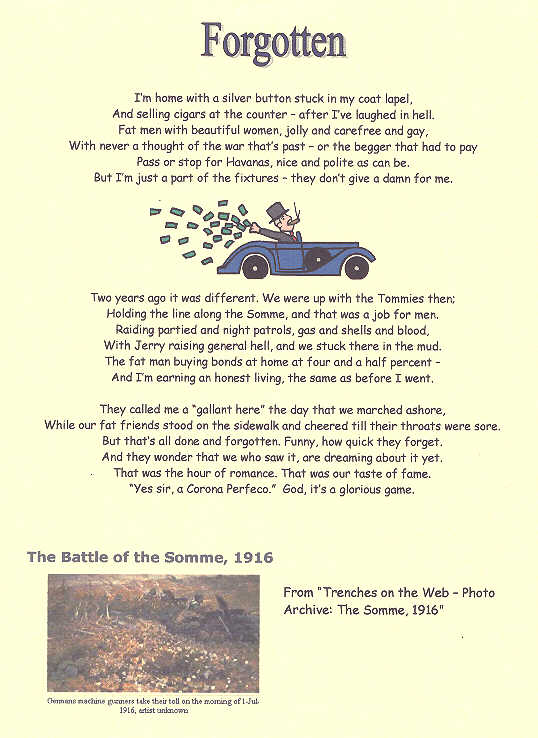 My father takes up the cause of the many soldiers back from the war and all it's sacrifices of time, comfort, and the danger of loss of life and limb who then find good jobs difficult to find. The fat cats who got rich while they were "over there" show no gratitude ar even acknowledge their sacrifices. He points to the Battle of the Somme to illustrate the hardships and dangers these soldiers faced, a battle that was one of the most horrific of "The Great War", See Somme.

The poem was undated but I am sure it precedes the gross indignity that these veterans suffered in 1932. Having been promised a bonus for their service and over a decade after the war, now faced with the joblessness of the great depression, many marched on Washington, DC and camped in the parks demanding what was promised to them. see Bonus Veterans . It was there that the injustice was exasperated by government military action against them.

At the same time be careful about what you believe in what you find on the internet. While researching the Bonus March I came upon another web site that distorted the event beyond any sane belief. The authors of the particular page were using a bit of truth augmented with blatant lies to turn us against our government.

Thanks again to my sister Marilyn Copeland for applying the graphics and preparing this page.